The history of Oaks Christian School (OCS) begins with the generosity of David Price and Dallas Price-Van Breda. Their vision was to create a Christian high school of high caliber in the Los Angeles area.

Their search for a suitable property began in March 1994, but yielded few options and no success. In 1997, after much prayer and patience, an 18-acre piece of property became available in Westlake Village. Although at first this location seemed too far away from the original vision for a West Los Angeles school, the Prices felt led to consider the Conejo Valley as the place for their dream. Shortly thereafter, the property was purchased and board members were secured. In 1998, Jeff Woodcock was appointed as the founding headmaster, and soon thereafter the faculty and staff were hired. Today, 12 of the original employee hired are still at Oaks Christian. The inaugural class came in as sophomores in 2000 and graduated 73 strong. 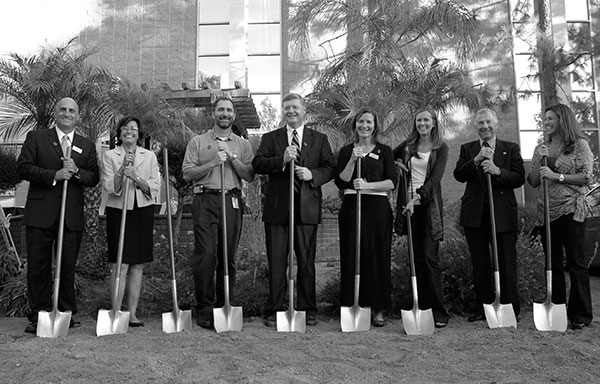 Original Headmaster Jeff Woodcock laid the foundation for two years before the doors to the school opened in 2000 with 198 students in grades 6, 9 and 10. Grades 7 and 11 were added in 2001 and enrollment was at 441 students. Grades 8 and 12 were added in 2002 and the school year began with 646 students. The first graduating classes of 8th and 12th graders participated in the historic inaugural commencement ceremonies in spring 2003. It soon became evident that the growing middle school needed its own distinct campus. Oaks Christian was presented with an opportunity to secure a property adjacent to the current campus.

This seven-acre site was developed to create a new OCS Middle School campus complete with modern facilities and creative programming specifically geared toward middle school students in grades 6 through 8. The grand opening of the new middle school campus in August 2009 marked another chapter in the school's history - the fruits of the Price's generosity and an extension of their original dream and vision. The middle school also built its own cafeteria, unique grade-level pods, and athletic programs and facilities. In 2014, Oaks Christian added Academy V, an elementary fifth grade program with one class which has now grown to four classes. Nine of the 21 original students who began their educational journey as fifth-graders in Academy V will graduate as high school seniors in spring 2022.

In 2007, the new 30,000 square foot Bedrosian Pavilion opened on the high school campus as a multi-purpose, state-of-the art performing arts center. The Bedrosian Pavilion enabled students to flourish in the beautiful facility equipped with more highly advanced technology and theatre-specific features than many colleges. "The Diary of Anne Frank" was the first theatre arts production in the new venue, reaching beyond the OCS family as many from the community attended the powerful drama. The traveling Anne Frank Exhibition, on loan from the Anne Frank Center in New York, was also showcased in the new pavilion.

Oaks Christian officially dedicated its renovation baseball stadium complex in April 2009. The $500,000 project included elevated bleacher seating, a new press box, and concession stand, and a team room complete with players' lockers. The official opening ceremony brought together school and city officials and project donors, including professional hockey player Wayne Gretzky, his wife, Janet, and son, Trevor, who was on the team. In addition to the baseball field, Oaks Christian also built the Leko playing fields, the Sotelo Aquatic Center, and the Huffman Field in middle school.

In 2011, the online school was established to serve full-time online students and offer online courses to the main campus students. Students can be fully online or create a blended schedule of online and in person classes. Today, Oaks Christian Online serves students from other schools, private or public, and homeschool students.  School across the country also use OCO's online courses for their students.

In 2012,  the Learning Center pilot program grew to 80 students, and became a formal program providing students with tutoring help. The program experienced great growth, and in 2013 Oaks Christian purchased the adjacent Westlake Plaza to house the Learning Center (now serving over 800 OCS and community students, annually), as well as the online school.

In 2019, Oaks Christian School opened a residential dorm for domestic and international students, as well as an IDEA Lab (innovation, design, engineering and aerospace) on campus to focus on STEM initiatives. The 10,000 square foot facility is like no other high school science lab in the state of California, giving OCS students a jump in STEM career paths (Science, Technology, Engineering, and Math). The central hub of this new space is the 4,000 square foot fabrication lab which will house metal and wood fabrication machines, 3D printers, and a variety of other useful tools, such as Haas tools that are typically reserved for college fabrication labs or industrial labs. The lab allows students to make basically anything out of anything including robots, aerial and underwater drones, rockets, and even basic prosthetics. The lab is also home to our Institute of Engineering.

Oaks Christian's 20th anniversary celebrated the vision, work, and dedication of OCS founders, volunteers, staff, families, alumni, and donors who have made Oaks Christian what it is today—a God-honoring school that prepares young men and women for a life of purpose and service.

From an original enrollment of 198 students, Oaks Christian now has a robust student body of approximately 1,500 students in grades 5 - 12.

During the 20th year,  Oaks Christian launched three signature institutes: The Institute of Engineering, the Institute of Global Leadership, and the Institute of Arts and Innovation (IAI). These three institutes give students a concentrated pathway of study in their area of interest, providing internships, mentorships and opportunities to connect with industry leaders.

With the launch of these three initiatives, Oaks Christian had established itself as an academic leader, delivering an unparalleled opportunity for students to step into 21st Century learning while finding their individual spark.