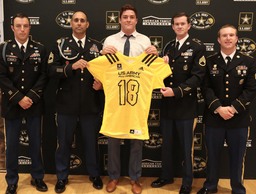 For OCS senior Bo Calvert, the No. 13 overall high school outside linebacker in the nation and a USC commit, his selection to the 2018 U.S. Army All-American Bowl was not only an affirmation of his athletic prowess (he is only one of 12 selected from California), but also the realization of a childhood dream.

Calvert transferred to Oaks Christian School as a sophomore, but his path to OCS actually started as an awestruck nine-year old attending a summer sports camp on campus, surrounded by great mentors and athletes. One such role model was OCS football player Malcolm Jones, a powerhouse running back and linebacker who had been named the Gatorade National Player of the Year. Despite Jones' prestige, he took a moment to kneel down to Calvert's level to offer some encouragement.

"He humbly put his arms around me, a skinny, freckled-faced ginger and pointed to the banner [of All-Americans along the football stadium] with his name on it and said, 'Someday, if you work hard enough, your name will be up there with mine,'" Calvert shared at his jersey presentation ceremony Oct. 2.

That pivotal moment was when he knew he wanted to play for Oaks Christian someday. And not only has he played for the Lions, but he has led the Lions. He is one of the team captains and the 2016 Marmonte League Defensive Player of the Year and the 2016 Ventura County Defensive Lineman of the Year. With such impressive honors, it is no surprise that he was selected to play in the 18th annual East. Vs. West matchup on Saturday, Jan. 6, at the Alamodome in San Antonio, Texas. The bowl features the top 100 high school football players and will be nationally televised, live on NBC at 12:00pm, CST.

"It has been a pleasure to coach Bo. He is a high school standout not just in football, but in citizenship and sportsmanship," said OCS Head Football Coach Jim Benkert.

As a result of Calvert being selected as a U.S. Army All-American, Benkert is invited to travel to San Antonio to attend the U.S. Army Coaches Academy, an elite three-day learning experience, and participate in Bowl Week activities.

Prior to donning his jersey, Calvert stood at the podium in front of the entire high school student body, faculty, staff, coaches and representatives from the U.S. Army-All American Bowl and thanked those who made his childhood dream come true.

He acknowledged his dad, David, for helping him foster a competitive spirit and being behind the scenes "cheering me up and cheering me on." He praised his mom, Sirena, for countless hours driving to practice, preparing meals and inspiring him to keep going on when he didn't feel like it. He thanked Benkert for working with him, scouting colleges, but most importantly, "for all you have done outside of football to help me be both the man and the player the team needs me to be."

He also gave a shout out to the senior class and Josh and Ethan Calvert, his brothers and fellow teammates.

The U.S. Army All-American Bowl consistently draws an annual crowd upwards of 40,000 to the Alamodome and is the most-watched high school sporting event of each year, with 5.1-million viewers tuning in to last year's broadcast.

For 18 years, the U.S. Army All-American Bowl has been the nation's premier high school all-star event and football game, serving as the preeminent launching pad for America's future college and NFL stars. Odell Beckham Jr., Andrew Luck, Eric Berry, Tim Tebow, and Sam Darnold are just some who made their national debuts as U.S. Army All-Americans. A total of 351 U.S. Army All-American alumni have been selected in NFL Drafts. Last year's Bowl drew an all-time record crowd of 40,568 to the Alamodome.

The U.S. Army All-American Bowl is presented by American Family Insurance and is owned and produced by All American Games.