Athletic History Made on Signing Day 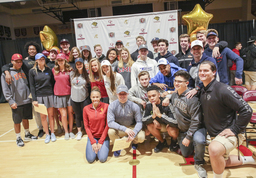 Additionally, at the time of the ceremony 20 more students had yet to officially commit to a school, upping the potential number to sign from one OCS senior class to an unprecedented 50 student-athletes.

The annual event is traditionally held in the Disciples Chapel but was moved to the Dallas Athletic Facility to accommodate the increased number of family and friends attending.

For a photo gallery of the day please CLICK HERE.

"We are just thrilled to have the largest group ever signing today," said Athletic Director Jan Hethcock. "It's a testimony to the athletes' hard work and discipline, but also their coaches and families who have supported them all the way."

The event also marked two other historic milestones. It was the end of an era for the Owusu family whose five OCS students have signed to play college sports. Senior and 6'6" linebacker-defensive end Michael Owusu signed with Vanderbilt, following in the footsteps of his four alumni siblings. Brothers Francis and Chris signed as receivers with Stanford, brother Brian played defensive back at Harvard and sister Crystal played basketball at Columbia.

"Our family has been so blessed to have these opportunities," Michael shared, "Some people never get even one, so I am humbled by this. The future is bright and I am looking forward to it."

"It's amazing how time goes by in a blink. I am proud to stand here today with Danny," he said.

The Lions football program had the largest group signing to play college ball. Colby Parkinson will be heading to Stanford. Anthony Burgos will play for University of La Verne; Devon Calloway goes to San Jose State; Nicolo Difronzo signed with Cal Poly San Luis Obispo; Brandon LaBrie will play for the South Dakota School of Mines; Grant Marcketta heads to Washington University in St. Louis; Shea Pitts will be a Bruin at UCLA; Harrison Turlington will play for the University of Virginia Cavaliers.

The sister duo of Kayla and Sarah Ketring will continue their softball careers together at University of Pennsylvania.