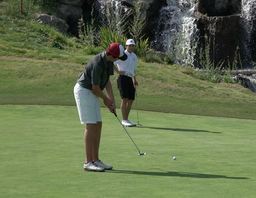 Junior Cole White led an exceptional boys golf team to a historic upset over Westlake High School to capture Oaks Christian School's first-ever CIF boys golf title. White came up big with a 4-under 68, one of only three sub-par rounds at the CIF Northern Team Divisional Championship at Soule Park in mid-May. The final OCS team score was 367, which knocked Westlake to second place, the first time in five years the cross-town rival did not win the CIF Northern Division title.

The win propelled the team to the Southern California Qualifying Tournament at Rancho San Marcos Golf Club in Santa Barbara where the top four teams and top 28 players advanced to the SCGA Regional State Qualifier. The team then qualified to go on to the CIF-SCGA Southern California Championship at Brookside in Pasadena. From there they have a chance to fight for the state title on May 31.

"This season has been both exhilarating and frustrating. Without a doubt, it's probably the best group of golfers I've had in 13 years of coaching. The team is very solid with the top players consistently scoring in the low to mid-70's. But what's most frustrating is that we have 7 of these top players but only 6 players are taken to any given team event. So unfortunately there's always one player who is left behind although that individual is just as deserving to play as the others," said Coach Tom Placke.

"I knew early on that we were going to have a very good team. We scored low in a couple of the early non-league matches before we started league competition. The question was whether we were strong enough to beat Westlake who had won the league championship for 5 consecutive years and who had won two state titles," he added.

As it turned out, Oaks Christian beat Westlake in 6 of 7 competitions with the only loss to them coming when one of their players scored a phenomenal 61 against the OCS team. Other than that, they were undefeated for the entire season.

Placke also fostered a spiritual focus for the team. On van rides to meets, players would take turns reading form the devotional book "Part of a Champion."

The win capped a phenomenal season which saw the Lions field a strong team and capture the Marmonte League title over Westlake by three strokes at Rustic Canyon Course in March. Oaks Christian was the first team in five years to defeat Westlake for a league title. McGovern's even-par 72 and Marek's 1-over-73 led the Lions to that win. The team also won the Oak Park Invitational where Ahmadi anchored the Lions to a team score of 228 and a first-place finish.