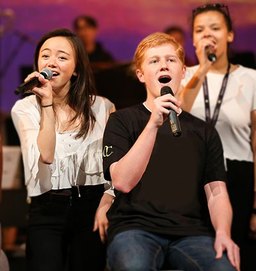 It has been said that the most beautiful musical instrument ever created is the first—the human voice.

With the surge of enormously popular a cappella groups such as Pentatonix and Straight No Chaser, and shows like Glee,The Sing-Off, and the Pitch Perfect franchise, that axiom is proving true.

Rob Dietz, arranger and group coach for NBC's The Sing-Off and a winning producer who has been arranging, performing, and teaching contemporary a cappella music for over 15 years, is partnering with OCS Choral Director Edward Rouse to train members of OC Voices in a cappella performance. The group had their debut performance at the annual admissions Open House, delighting the audience with their rendition of Bill Withers' Ain't No Sunshine.

"I'm really passionate about creating more opportunities for young singers to perform contemporary a cappella music at the high school level! With the success of a cappella in the media... we're seeing more and more schools like Oaks that have awesome, established choral programs and are looking to add pop music to their curriculum by incorporating this style. Young singers can learn so much from this approach to vocal education," Dietz shared.

Dietz's passion is paired with his experience. He is a founding co-director (along with Ben Bram and Avi Kaplan) of A Cappella Academy. He is also the director of Legacy, an auditioned, community youth a cappella group based in Los Angeles. In 2017, the group's inaugural year, Legacy won first place in both the Los Angeles A Cappella Festival's Scholastic Competition, and the Southwest semifinal round of the Varsity Vocals A Cappella Open. In 2018, the group won the International Championship of High School A Cappella finals at Lincoln Center in New York City.

That passion and experience is evident in the classroom as he and Rouse train OCS vocalists. During a recent classroom practice session, students shared their excitement about the new direction for OC Voices.

"He is doing such great work with arranging in the industry, so having him come here and help us do a cappella in a pop style is terrific. The whole sound relies on the entire group so if any voice is off or not hitting pitch it really changes everything," said junior Alexys Ahn. "For me to be able to see that in a real world setting with my peers is what I am most getting out of this. I want to pursue songwriting in college, so this type of arranging is personally really great for me to learn."

As the group gets established, Dietz wants to use the first year to introduce singers to the distinctives, nuances and best practices of a cappella performance such as extended vocal techniques like bass singing and beat boxing that round out the sound and really change the character of the music. In subsequent years, he and Rouse hope to enter the group in regional and national competitions.

Junior Sawyer Lazar is particularly thankful that Dietz is helping with vocal percussion, the ability to use the human voice to emulate instruments such as drums, something that will give him an edge if he pursues musical theatre.

Ariel Trussell, a senior, wants to major in music performance and commercial music in college, and feels the a cappella choir is giving her an advantage.

"The knowledge he passes down to us is what I am taking with me to college, even fun thing like teaching us how to beat box. The entire experience is very professional and helpful as I get ready for college,"she said.

As students get excited and the word spreads about the a cappella choir, Dietz is hoping students who may never have considered choir will be interested in auditioning.

"Music is all about communicating, and one of the things I love most about a cappella is that it allows young singers to communicate via the music that they're listening to today - the music that's part of their lives on a daily basis!"