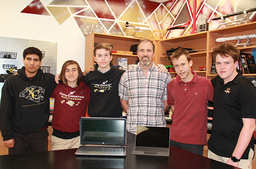 In their inaugural year, the OCS CyberPatriots came out of the virtual gate swinging and never looked back. The six-man team represented Oaks Christian at the highest level earlier this spring against 5,400 other teams at the National Youth Cyber Defense Competition.

Organized by the CyberPatriot National Youth Cyber Education Program (created by the Air Force Association), the competition puts high school and middle school teams in the position of IT professionals tasked with managing the network of a small company. Teams are given virtual images that represent operating systems. They are given six hours to find cyber security vulnerabilities in the images and harden the system while maintaining critical services.

Based on their scores from two prior qualifying rounds, the team earned a platinum level status going into the state competition of the event. They placed in the top 30 percent of platinum teams and missed advancing to the national level by a narrow margin; quite an accomplishment for a newbie team.

While other schools competing at the platinum level have long-established cyber security teams, Oaks Christian is a newcomer to the game. Most schools begin practicing in the summer, but the OCS team did not even form until school had started, making their platinum level achievement even more remarkable.

"We were thrilled and a little shocked that the team was able to obtain the highest category of competition in the inaugural year at OCS," said club advisor and OCS Director of Information Technology Darrell Parker. "Because the club was formed several weeks after school started, we missed all practice rounds of the competition, so we had a bit of a learning curve when it came to the real thing. I was blown away with all the knowledge the team had already acquired—which was mostly self-taught in their spare time." 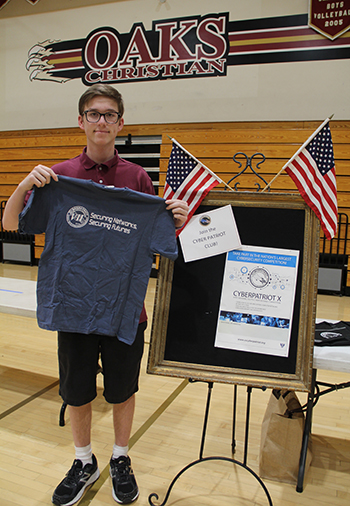 Indeed, the entire concept of the club was student-driven from the start. It was founded by sophomore Charlie Kempf, who wants to work in the aerospace industry one day. He participated in CyberPatriots through the Civil Air Patrol as a middle schooler. This year, he approached a couple other students about starting an OCS club. He pitched the idea to Parker and the IT staff (who loved it) and Principal Karen Coyle, who, as a retired Naval Commander, was sold right away.

Kempf got busy making recruiting posters and getting a booth at club rush. He was worried the club would not attract enough students to field a team but was blown away by the interest. He had more students apply than he could take so he had to make cuts. Besides Kempf, club members include: Matthias Portzel, Max Weinbach, Caleb Behunin, Jason Zhang and George Madias. The club is open to females as well, but none applied this first year.

With the club established, it was then a mad dash to prepare. The first competition was only two weeks away. Other schools start practicing in August, way in advance of the event, so the team was under a lot of pressure.

"Normally we would practice one day a week, but we were squeezing in three practices," said Kempf. "I was expecting that we would maybe scrape into the middle tier, but when we finished round two and found out we were platinum it was an exciting moment. I was so proud of the team."

He continues: "And of course, we could not have done it without Mr. Parker. It was my first experience in leadership. I knew nothing about bringing a team together, motivating people and getting them to work well together. He taught me so much."

Besides prepping for competition, the club also takes field trips and hears from experts in the field. In the fall, they attended a cyber security seminar in Oxnard to hear a local FBI agent talk about the magnitude of cybercrimes in Ventura County and how costly they can be. This spring, they invited a local expert to share personal experiences of getting hacked, and how she now helps train and protect senior citizens from falling prey to cyber criminals.

These type of activities support the overarching goal of CyberPatriots; it is designed to attract students to science, technology, engineering and math (STEM) as a career path to help protect the United States cyber industries, commerce, public safety and national defense.

According to the U.S. Bureau of Labor Statistics, employment of computer and information technology occupations is projected to grow 13 percent from 2016 to 2026, faster than the average for all occupations. Demand for these workers is fueled from greater emphasis on cloud computing, the collection and storage of big data, and information security, all which are vulnerable to cyber attacks.

Because he doesn't teach, Parker has enjoyed connecting with the students around a common interest in computers and technology, but he also hopes "they will have a general awareness of cyber vulnerabilities and possibly become interested enough to pursue a career in cyber security."

Kempf agrees that people in general should have a greater sense of cyber security given the loss of privacy in a digital world.

"Privacy isn't really a right anymore. You have to trust some company to protect your data or you must do it yourself—or at least be able to tell if your stuff has been stolen or copied. It's a huge thing these days."