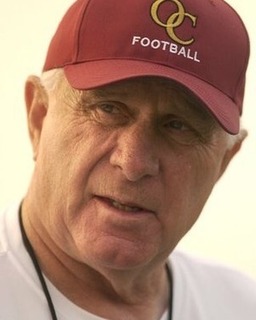 Legendary Oaks Christian School Football Coach Bill Redell has been named the recipient of the Rose Bowl's national "Coaches Making a Difference" award. The theme of this year's Rose Bowl is "Making a Difference," and in conjunction with the National Football Foundation, the contest honors coaches who have made a difference in the lives of student-athletes in their community. As the honoree, Redell will receive a trip to the Rose Bowl game, on January 1, 2018, featuring the Oklahoma Sooners (No. 2) vs. the Georgia Bulldogs (No. 3).

"Other than being inducted into the College Hall of Fame, it is probably the highest honor I have ever received. I can't tell you how thrilled I was when I found out and at the same time how humbled I was by it. It's a national recognition and it means so much to me to be honored this way at the end of my career," said Redell.

Coaches nationwide were nominated, and a panel of representatives from the Tournament of Roses and National Football Foundation selected the five finalists and the one grand prize winner.

"Coaches play a significant role in the lives of the youth that they work with," said Tournament of Roses President Lance Tibbet. "They not only have the power to touch the heart of a young student-athlete but also engage and inspire the soul of a community."

Redell's illustrious career included coaching at Crespi High School, St. Francis High School, the USFL for the Portland Breakers, and Oaks Christian High School. He built a premier football program at Oaks Christian and led the Lions to nine CIF championship games, seven CIF victories, and a 2006 state championship. He was inducted into the College Football Hall of Fame in 2001.

Returning to the Rose Bowl is a bit of a homecoming for Redell who grew up in Pasadena and attended McKinley Elementary School and Annandale Junior High School before his family moved to San Marino. He grew up around the Rose Bowl, and his father attended every game except during World War II.

"As kids we use to walk over to the Rose Bowl and one time my junior high team was part of 40 other schools who were invited to come down at half-time to play on the field," he reminisced.

"We are very proud of Bill. He is very deserving of this recognition and I join with the entire OCS community in congratulating him," said Head of School Rob Black.