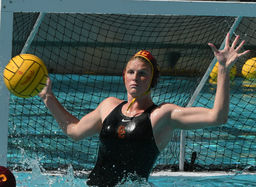 Oaks Christian alumna Amanda Longan '15, was awarded the prestigious Peter J. Cutino award in early June for her outstanding performance as the goalie for the USC women's water polo team. The award is considered the "Heisman trophy" of water polo and the recipient is selected by the Division 1 US water polo coaches. The award is given annual to the top male and female in the National Collegiate Athletic Association (NCAA). Longan is only the second USC female goalie to win the award.

USC beat Stanford in a tense face-off to win the NCAA Championship and Longan was named the NCAA Tournament MVP.

In her stellar 2018 season, Longan had 11 games with double-digit saves and became the first USC goalie ever to record two complete-game shutouts. Her work helped solidify USC's defense to end the season the NCAA Championship for a 26-1 final record.

Longan, who just completed her junior year at USC, said "It's unreal to think about just seven years ago when I started my water polo career at Oaks. There have been so many people who have helped and supported me and as well as given me great advice along the way. I am so appreciative of Coach Larry (her coach 9th-11th grade) and Coach Jack (12th grade coach and current boys and girls OCS water polo coach). I am so thankful for my faith, my parents, my family, my teammates, my coaches, Oaks Christian, and USC."

Besides earning the highest award in all of collegiate water polo, there is a unique Oaks Christian connection to this award.

The Cutino award was established in 1999 in honor of the late University of California, Berkeley Coach Peter J. Cutino, universally revered as the best water polo coach America has produced. Cutino's daughter, Anna Cutino-Smith, is an Oaks Christian mom. Cutino-Smith had the honor of presenting the award to Longan at the San Francisco ceremony.

"It was just a great evening all around. My dad wanted a place for all kids to have a place to go and a sport to play and this was water polo. Our family has been involved in water polo for a long time and I knew heading up to San Francisco for the awards that there was a chance that this year's award might be going to an Oaks Christian alum. I told Amanda that the arms of OC are around her," said Cutino-Smith.

Longan trains year-round and has her eye set on the 2020 Olympics. She will continue to train with the USA National Team, graduate from USC next spring with a psychology degree, and then spend the 2019-20 year training fulltime for a spot on the Olympic team.