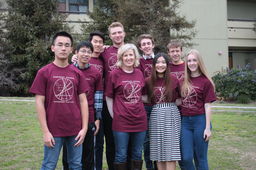 The numbers all added up for the 11/12 team from Oaks Christian School at the 29th Annual Westmont College Mathematics Contest in early February as the team clinched the first place win in the Written Exam category and scored a solid second place overall win. Under the direction of honors math teacher Janet Fredrickson, YinXu Deng, Justin Gerwien, Samantha Speer and Asher Baer scored the impressive wins.

"It was fun for me as a teacher to watch our 9/10 and 11/12 teams come together and get into the spirit of competition and math," said Fredrickson.

The brainchild of Westmont math professor Dr. Russell Howell, the annual competition, dubbed the Super Bowl of math, brings together the best and brightest "mathletes" from Southern California high schools. Each school fields two teams—juniors/seniors and freshmen/sophomores—for a total of eight students per school facing off in a college bowl format where team members buzz in their answers.

Preliminary events included the written exam, where each team had about 75 minutes to solve challenging math questions, and a "chalk talk" PowerPoint presentation given by one team member.

Gerwien represented Oak Christian with his PowerPoint chalk talk on prime numbers, spending an extra six hours researching the topic and another hour writing his presentation. It was this love of learning and dedication to spend significant personal time outside the classroom that helped him lead the 11/12 team to victory in the Written Exam.

The contest organizers noted, "A quick review of the leading journals reveals that mathematical discovery these days is a team effort: research articles frequently have more than one author. The purpose of the team exam is to challenge students to think creatively, and to encourage mathematical collaboration. Given a set of five problems, the students must decide how to tackle them. The best strategy appears to be some combination of individual and collective effort."

After the event, the teams enjoyed the awards banquet and a pizza dinner, as well as a presentation by Howell on the mathematical explanation behind this year's t-shirt design. The design was a drawing of a pizza showing the maximum number of pieces that can result (29) when cutting into a pizza only seven times. Every year, the contest number (this year was the 29th annual contest) and the topic (prime numbers) is worked into the design of the t-shirt.