Pursuing the American Dream Through a Lens 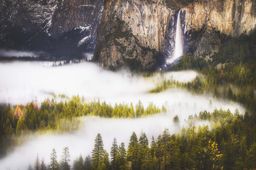 For generations, the Great American Dream has motivated and inspired hundreds to migrate to the United States. Whether it is the iconic white-picket fence home with 2.5 kids and a dog, a successful entrepreneurship, or fortune and fame, the manifestation of the dream is as diverse as the people dreaming.

For OCS senior Steven Guo, a native of China, the dream was the beauty of America itself— its acres of vast public lands and open natural spaces—and the golden opportunity to capture it all in photographic splendor.

Growing up in the crowded urban sprawl of Shanghai, Guo recalls a transformative moment when he laid eyes on the Grand Canyon. As a prospective international student, he had come to America in 2011 to visit Oak Christian School. While in the states, he planned visits to Grand Canyon National Park and Yosemite National Park. Although he had seen photos of both, he wasn't prepared for the actual experience of standing in front of Yosemite's magnificent waterfalls or at the vast edge of the Grand Canyon.

"I had never seen much open space in China because I lived in Shanghai. It is hard to describe what I felt when I first saw the Grand Canyon. It was just amazing, incredibly unique," he shared.

His love of photography started as a five-year old playing around with his father's old Nikon film camera. He'd shoot simple photos around his hometown and later his computer science teacher Ying Ma at Huayu Middle School further inspired and encouraged him. But now he knew he had to come to America and pursue his education. He enrolled at Oaks Christian School in 2013, determined to follow the path of acclaimed nature photographer Ansel Adams.

And he is doing just that.

For someone not yet 20, he already has an impressive resume filled with accolades.

In 2016, he was named the Scholastic Art Awards National Gold Medal winner for his black and white photo, "The Invisibility Cloak." In the same year he took first place in the Santa Monica Mountains National Recreation Area - Spirit of the Mountains Photo Contest. Earlier this year he won the 2017 Scholastic Art Awards West Art Region-at-Large 1 Gold Key & 2 Silver Keys. His latest commendation came this spring from the Sony World Photography Awards, Youth Division.

He credits the development of his talent to former OCS photography teacher Karla Chouhan whose mentorship helped him master technique. He is also enrolled in the Advanced Location Photography class, taught by Blanca Schnobrich who praises Guo's ability.

"He has an uncanny photographic eye both through the lens and in post-production. He is a true artist and one of the best student photographer's I've ever met," she said.

Beyond the awards themselves, Guo was honored to be one of the handful of recipients awarded a National Park Artist-in-Residency opportunity mid-way through his senior year. The program offered artists a chance to pursue their discipline while immersed in the park landscape. Guo received academic clearance to spend a few weeks in January living and working at the Petrified National Park in Arizona. He took photos, set up displays and interacted with visitors.

"My favorite part of the residency was the unique landscape of this park and the historical significance with the fossils there," he said. "I also had the opportunity to share about China and my culture back home."

One of his goals for the residency program was to become stronger as an artist.

"I really wanted to be alone in nature to improve my photo technique and make my work really consistent. I think part of being an artist is developing a style so that when people see my pictures they can see it's mine and my work flowing from my own style."

Guo was able to concentrate on his specialty— low-light, long-exposure photography—capturing some brilliant shots of the clear night sky. He loves landscape photography and one of his ultimate goals is to visit every national park in the West and publish a photo book.

With graduation just a few weeks away, Guo has accepted his admittance offer from Pitzer College in Pomona. Professionally, he is still deciding what field he will pursue, but knows that he would love to combine his aptitude for math and environmental science with this love of nature and photography. Those two would dovetail nicely if he became a national park ranger, but that remains to be seen.

What is certain is his calling is clear—"I can hear nature's wonder and my wildest American Dream calling," he writes on his website.