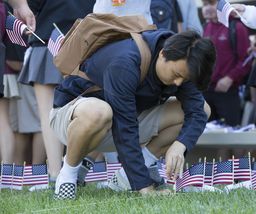 On the 17th anniversary of the terrorist attacks on America on Sept. 11, 2001, the Oaks Christian School community held a special assembly and planted 2,996 flags to honor and remember those who died and those who gave their lives saving others.

High School History Teacher Dave Moore, whose own father served in the military, began the assembly with the question, "What would you do in the last hour of your life?"

In way of response, he shared part of a gripping film, "The Man in the Red Bandana," which tells the story of Welles Crowther, a young man working as an equities trader in the World Trade Center south tower, but who aspired to be a fire fighter. When the plane hit the tower, he spent the last hour of his life leading others to freedom. Rather than escape when he could, he kept ascending the stairs to save more people and died when the tower imploded.

The poignant and moving video featured the memories and eternal gratitude of those he helped save, as well as his parents' and friends' recollections of his innate love for helping people. His sacrifice continues to be remembered this day by the iconic red bandana he always wore and the Boston County Red Bandana Run charity event.

Although Crowther's sacrifice was heroic, Moore challenged the OCS students to think about what they could do, small or large, in acts of service to others.

"We have a responsibility to remember the sacrifice people who served made to keep us and the generations to come free," he shared. "Start by simply serving others, and remember the man in the red bandana."

Many of the students were not yet born or were barely toddlers when the tragic events transpired. But the video of Crowther and the opportunity to plant a flag in memory of someone who died, touched them.

"The video was really moving. To know that someone would sacrifice their life to help other people, wow. Even though I wasn't alive then, I could still feel the sadness and how terrible the tragedy was," said 14-year old Nick Salstrom, a freshman.

Junior Loren Schneider reflected on the flag planting. "It was moving to read the name and the age of the person (on the flag) and remember that was a real person who died at age 25. I appreciated the opportunity to remember," she said.

For one OCS teacher, the Field of Honor flags held special significance. High school math teacher, Tim Meinert was feverishly looking for a specific name. After 15 minutes and with many helpers, her name was found. Prior to teaching at Oaks Christian, Meinert worked at La Jolla Day School where he taught a young lady named Deora Bodley. Bodley was 20 when she lost her life on Flight 93 on 911. She was attending Santa Clara University and had traveled to New Jersey to see her friend.

"It means a lot to me as we were close," shared Meinert. "She was a unique, cheerful young lady."

OCS junior Christian Mayer was instrumental in organizing and orchestrating the flags for the Field of Honor. Each flag is labeled with a name of a life lost, including Crowther (The Man in the Red Bandana).