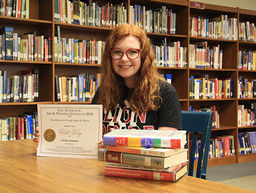 It's been said that art imitates life, and that certainly is the case for Oaks Christian sophomore Amelia Compton whose short story "Locked Down" won as a Gold Key regional entry and Silver Medal national entry in the Scholastic Art & Writing Awards, the nation's longest running and most prestigious creative recognition program for students in grades 7 through 12.

"Locked Down" is a story that could be taken from today's headlines about school safety. Compton wrote about five students in a school lockdown who aren't sure if the lockdown is a drill or the real thing. The story is told through the perspective of the five students, and it certainly proves that creative expression can be based on true life events.

"I was inspired by a lockdown we had on campus one day. We were in the library and had to hide under a computer desk, but no one knew if it was a drill or not," Compton said. "That got me thinking 'What if you were in a real lock down? What would be going through your head?'"

Her narrative caught the attention of the judges at the regional level where it won a Gold Key award, and then it was entered in the national competition. This year, students nationwide submitted more than 330,000 works of visual art and writing to the Scholastic Awards. The Gold Key winners at the regional level moved onto the national stage, where 2,700 works (less than 1 percent of the original entrants) earned national medals.

Compton was pretty jazzed her story won Gold Key at the regional level but was shocked and thrilled when she heard she placed as a silver medalist nationally.

"I was pretty excited at regionals, but I didn't think I would be able to get to the national level since there are so many people competing. I never thought this would happen," she said.

While she may have been astonished she earned national honors, her English teacher Elisabeth Hoekendorf wasn't.

"I am not surprised to see that Amelia has won this award! It is so exciting to see her writing being validated on such a momentous scale," said Hoekendorf. "From her very first essay in my course, I have been impressed with Amelia's clarity of style and her ingenuity of argument and expression. Her writing is clear, engaging, insightful, and, quite frankly, a pleasure to read!"

Compton has also been honored by OCS High School Librarian Diana Kim-Yoon who selected her, along with senior Nathaniel Salazar, to chair the OCS poetry event on April 30, as part of National Poetry Month.

"The time I've spent with her, I realize she is very responsible, creative and mature. She is very resourceful and is a great part of the student library committee," said Kim-Yoon.

Compton has been writing all her life—short stories, poems, novel—and was encouraged and taught early in life by her mother, Carrie, who was an English teacher.

"I absolutely love writing. It's my favorite thing in the whole world. I love the ability to not only tell a story, but a message, and create characters with feelings that others can relate to and share emotion," she said.