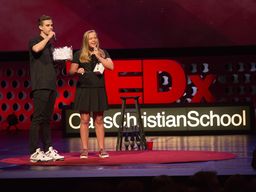 The ideas of tenacity, perseverance, self-discovery and inspiration shone brightly at the recent TEDxOaksChristianSchool event that was attended by over 1,000 members of the OCS community.

With the theme of "Illuminate," the day featured diverse speakers from widely different fields such as aerial arts, medicine, entertainment, and the Federal Bureau of Investigation. Now in its fourth year, the annual event expands high school students' academic experience by bringing distinguished speakers onto campus, speakers they may not otherwise get a chance to hear in the traditional classroom setting. Faculty were also encouraged to facilitate discussions in the classroom based on the ideas presented at TEDx.

Oaks Christian has a rich tradition of outstanding academic offerings, but what is unique about the TEDx event is that it is the students who make it happen. The event is advised by Laura Mason, director of alumni relations, along with OCS parent Shelene Bryan, but the students drive all aspects: recruiting speakers, promotions and logistics. During the event itself, they live-stream on social media, and interact with guests during the lunch hour.

"I am so proud of the TEDx student committee led by Joel Fischinger and Brooke Bryan. There is a lot of planning that happens behind the scenes to make this event happen and I will miss our almost daily TEDx planning discussions. What an honor for me to work with such talented students. " said Mason.

Students start planning last August and the result of their hard work was evident with the quality of speakers and the audience response- multiple standing ovations.

Attendees were privileged to hear from the following:

TEDxOaksChristianSchool is an independently organized TED event and is operated under a license from TED.

Thank you to our 2017 TEDx sponsors: The Law Offi cs of Hiepler & Hiepler, the Hainer Foundation, and the Davies Family.