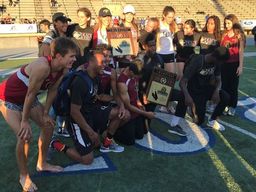 The story of the day came in the girls' high jump. For starters, senior Cassidy Palka won her fourth consecutive CIF-SS high jump title, becoming the second athlete with a career sweep of the high jump in CIF-SS history. Cassidy also becomes the only individual athlete to win four CIF-titles in the same event while also winning four CIF-team titles.

As if that wasn't enough to inspire the rest of the team, junior Rowan Cuadrado added to the excitement by overcoming multiple stress-related injuries to barely qualify for CIF-SS finals as the eighth seed. Cuadrado made the most of the opportunity by jumping a personal best of 5'3" and placing second to Palka. This performance not only added seven points more than expected to the team tally, but also qualified her for the CIF-SS Master's Meet.

Senior Carolyn Wilson defended her 400m title and qualified for CIF-SS Masters. Wilson also placed third in the 200m Senior Julia Sullivan defended her runner-up title in the 400m. Hannah Wilson was added as an alternate at the last moment and placed eighth, adding to the scoring. Palka wasn't done, adding a third place in the triple jump while sophomore Tasha Bierling placed fourth in the 300H.

The girls had already clinched the title entering the final event where Hanna h Wilson, Julia, Tasha and Carolyn Wilson won the 4x400m and qualified for the CIF-SS Master's Meet. Oaks Christian has won the CIF SS 4x400m the last four consecutive years. Palka and Sullivan will graduate as the two members of the Lions squad to be a part of all four CIF-SS team titles.

The boys tallied points in 13 of the 26 events, the most in CIF history for a boys team. Their 107.5 point total surpassed the OCS boys' previous best of 91.5 set last year. It is also only the fourth time in CIF history a boys' team has eclipsed the century mark in scoring.

Junior Dallas Holliday was the man of the hour— winning the CIF-Title in the shot put, eclipsing and surpassing the 50 ft. mark for the first time in his career. Holliday's main competition was his own sophomore team mate Luciano Barretto who defended his CIF runner-up title from last year.

The 4x100 quartet of Bryce Farrell, Cristian Moore, Nick Moore and Myles Webb brought the crowd to its feet as the Lions came from behind to beat #3 state-ranked Paraclete. This is the sixth CIF 4x100 title in OCS history for the boys and it catapulted them to a #2 state ranking.

The Lions closed out the day with another winning quartet in the 4x400m featuring Chasen Geisler, Zach Charbonnet, Colin Schaub and Nick Moore. The was the first-ever 4x400 CIF title for the Lions boys in this event and it set the school record at 3:20.54, beating last year's time of 3:20.61.

Junior Talin Lewis placed third in the long jump and added runner- up victories in the 110H and 300H. Lewis tallied 22 points in individual events, the highest individual point total in OCS history at a CIF finals for the boys.