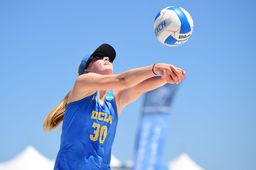 Congratulations to Isabelle Carey, OCS Class of 2015, for helping to propel the UCLA women's beach volleyball team to a historic first NCAA championship in May over fourth-seeded Florida State. As part of UCLA's No. 5 pair, Carey and teammate Megan Muret clinched an amazing 24-22 second-set victory to drive a 17-21, 24-22, 15-8 win to get the Bruins on the board first. Carey was also named to the NCAA All-Tournament Team.

The Bruins entered the match as the top-seeded team and ended the season with a 40-4 record (a single-season NCAA record that beat USC's previous 38 win record last year). At the championship tournament they won four matches in two days. 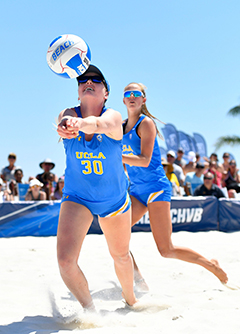 After an impressive high school volleyball career at Oaks Christian, Carey joined the Bruin family (majoring in business economics) and is a member of Bruin Varsity Life – Athletes in Action, the Bruin Athletic Council, and is a student representative on the Pac-12 Athletic Council. She has received academic awards for athletics and was recently named to the UCLA Athletics All-Academic roster.

Commenting on her win at UCLA, Carey took a moment to honor and recognize the athletic foundation and support she received at Oaks Christian as a Lady Lion for girls volleyball.

"It's been particularly special hearing the encouragement from my Oaks Christian family who have been some of my biggest supporters for so long and who got to watch on ESPN. I loved my time at Oaks, and it prepared me well for the work ethic I would need at UCLA in academics as well as athletics. Bringing home UCLA's 116th national championship is a feeling of elation that I will never forget," she said.

A setter, Carey started playing volleyball in middle school, coached by former Pepperdine star and professional beach player Carrie Wright. She played JV as a freshman (undefeated season), and then moved to varsity her sophomore year. Her varsity team, coached by George Hees, won league every year and several tournaments including the Nike Tournament of Champions. She was named the Ventura County Star 2014 Girls Volleyball Player of the Year, All-League First Team, and the Nike Tournament MVP.

Carey also played indoor club volleyball with both the LAVA and California Heat clubs in middle school and high school and with the newly formed Elite Beach Volleyball Club out of Manhattan Beach during her junior and senior years while attending Oaks Christian.

Carey helped Oaks Christian reach the CIF-SS Division 2AA finals for the first time in the program's history while also playing on the Under 17 USA Beach Elite National Team.

"In my junior year at Oaks Christian, I got a taste of the pure joy that comes from winning a big game with a quality group of people that I valued. That volleyball team, coaches, parents, and schoolmates all still remember the big dog pile after winning a huge playoff game that took us further than the program had ever been," she reminisced. 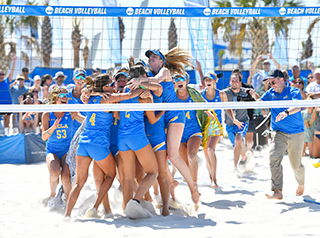 Two of her OCS teammates, Brooke Weiner and Taylor Foley, are also currently playing collegiate beach volleyball at Georgia State and the College of Charleston, respectively. In total, seven of the nine girls volleyball players in the class of 2015 went on to play either indoor or beach collegiate volleyball.

Carey added, "I'm blessed to have been able to experience such a feeling again on a much larger scale with the UCLA beach volleyball team. Seeing a year of our most diligent and intentional training pay off feels incredible, and I'm still in awe that we will go down as UCLA's first beach volleyball National Champions."