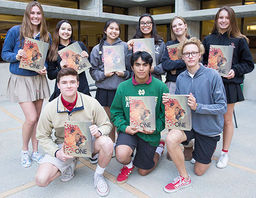 The superior design, writing and editing, photography and journalistic coverage of the 2016-17 edition of The Pride, the Oaks Christian High School yearbook, earned the book a Gold Medal rating by the prestigious Columbia Scholastic Press Association (CSPA), a department of Columbia University in New York, and a First Place rating from the National Scholastic Press Association (NSPA).

The CSPA and NSPA evaluate hundreds of high school yearbooks nationwide to determine those publications they deem as standouts in the field.

"This is a solid book," noted an NSPA judge noted in summary of a critique that evaluated several criteria including Coverage, Writing and Editing, Design, and Photography. "The theme ["As One"] is well developed and focuses on individuals within—the one," added the NSPA judge.

The CSPA critiqued three categories: Reference, Verbal and Visual. The CSPA judge commented, "Congratulations on a successful volume of The Pride. It is clear your staff aimed to follow scholastic journalism standards as you captured the history of the year."

The "As One" theme was showcased with a stunning cover, designed by current junior Woody Walker, and was effectively carried throughout the book. The staff of 14 was led by current senior Kira Imazu, who returns for a second year as editor-in-chief. Advisor Blanca Schnobrich brought seven years of yearbook advising experience to OCHS and is currently advising her 10th high school yearbook staff.

"I loved the book and the work we all put into it. I'm ecstatic that our hard work was seen by the judges. It's so rewarding for it to be recognized, and it's always great hearing the feedback on our yearbooks so we know the areas where we can improve. It makes me excited for this year's book and how the judges will score it," said Imazu.

She was particularly proud of the cover Walker designed as it truly captured the "As One" theme, and also reflected the general schoolwide theme of "One Oaks Christian" which was adopted by the administration last year.

"We finished the cover within the first few months of the school year, and it helped inspire me to make the inside of the book just as great as the outside. It was a great representation of what that school year was striving toward: unity. I know looking back on the book 20 years from now, I'll remember what the entire year was about just from the cover," she shared.

The 2017-18 yearbook, currently in production with 22 on staff, is being led by returning editor Imazu, and returning staff members, all serving in editor roles: senior Sophia Rasmussen, juniors Megan Mosquera and Hailey Martinez, and sophomore Kenzie Orloff. New to the editorial board, and first-year staff member, senior Shaylin Archer, rounds out a talented group working hard to create another successful book that will be released in May 2018.