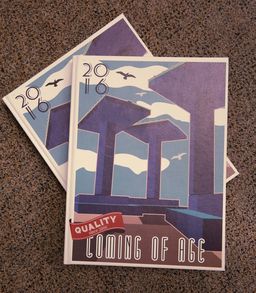 Congratulations to the 2015-16 OCS high school yearbook staff for their book being selected as a silver medalist in the Columbia Scholastic Press Association Awards. Each year the CSPA selects the top yearbooks in the country for distinct honors as award recipients.

Titled, "Coming of Age," the publication paid tribute to the school's 15-year anniversary and its growth as one of the most prestigious college-preparatory schools in the nation, while also encapsulating the high school experience of students transitioning into young adulthood.

The judges noted the book excelled in the areas of visual presentation, photography, cover design, and coverage of academics.

While just a few points shy of the gold award, the silver accomplishment is significant given the fact that the OCS yearbook was produced by only nine students who were competing with schools that have, on average, 25 students on staff.

"The graphics of this book tie many of your elements together nicely and the staff should be very proud of the work they have done, especially for being such a small staff," the panel remarked.

The CSPA is an international student press association, founded in 1925, whose goal is to unite student journalists and faculty advisers at schools and colleges through educational conferences, idea exchanges, textbooks, critiques and award programs for student publications.